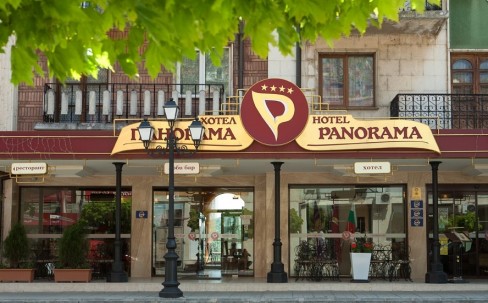 Situated in the heart of the town, hotel "Panorama" is very close by the most visited and primary tourist destinations and sights in the Old Capital, such as the old trade street, known as "Samovodska charshia" , the hill Tsarevets with the ruins and the castle on it, "The house with the monkey", the Stambolov`s Bridge, The City Art Gallery, the Asens` monument and the architectural reserve "Arbanassi".

With its unique architectural and interior design the hotel offers to its visitors 24 double rooms, 3 single rooms and 5 apartments. All of the rooms are equipped with air-condition, cable television, phone, electronic lock system, high-speed internet access, as well as luxury bathrooms with bath-tubs and hairdryers.

Some of the rooms have terraces. The rooms has two beds or one king size bed, some of them with a possibility for additional bed in order to accommodate third person and one of the rooms is fully equipped to be used disabled people. The apartments have two separated rooms; all of them have two bathrooms and provide for our guests stile, comfort, cosiness. The rooms offer a magnificent view to the Asens` monument, the hill Sveta gora and Yantra river.

Veliko Tarnovo is one of the oldest cities in Bulgaria having a rich history and past of more than 7000 years. During the two centuries from the 13centenial history of the Bulgarian Kingdom the city flourished and developed so that its fate became relevant to the fate of Bulgaria, remaining as a symbol of culture, international politics and eternity as well. In our days Veliko Tarnovo is administrative, cultural, historical and tourist centre.

Walking on the picturesque streets of the Old Kingstown Tarnovo, you will find the place that offers to all the citizens and guests of Veliko Tarnovo the panorama of pleasures that combines in itself past, presence and future.